BEIJING, Sept. 9, 2021 /PRNewswire/ — On September 9, 2021, the «Great Wall Hero 2021 – Beijing Winter Charms» global promotional campaign kicked off in style at the new state-of-the-art National Speed Skating Oval (The Ice Ribbon). The event, sponsored by the Beijing Municipal Culture and Tourism Bureau (hereinafter referred to as the Bureau), Beijing Organizing Committee for the 2022 Olympic and Paralympic Winter Games, and the National Speed Skating Oval, took place with more than 100 guests in attendance. 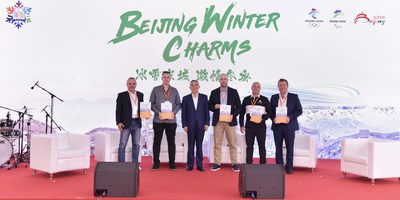 Some of the guests included members of the cultural and tourism bureaus of local districts, representatives involved in the management of tourist attractions around the city, inbound tourism companies, and multiple media reporters.

The event began with speeches by Mr. Ma Wen, the Inspector of the Beijing Municipal Culture and Tourism Bureau, and Mr. Wu Xiaonan, the Deputy General Manager of Beijing State-owned Assets Management Co., Ltd. And the Chairman of the National Speed Skating Oval.

During the event, a virtual tour of the «Ice Ribbon» was live-streamed via the «Visit Beijing» social media page giving a global audience a taste of what is to come in 2022.

The event continues to be a great platform to promote the global «Great Wall Hero» campaign. This endeavor brings international KOL’s together to check out the local tourism and culture of Beijing. These influencers then share their experiences online to give the overseas followers a fresh insight into what to see and do in Beijing. For the 5th year running, this event has proven once again to be a great outlet to show what Beijing has to offer.

As the Beijing Winter Olympics fast approaches, there has been a greater focus on the development of winter sports and winter cultural tourism in China. «Beijing Winter Charms» is all about changing people’s perception of a monotonous winter in Beijing and opening their eyes to the myriad of activities that are possible. It gives people a taste of all the different kinds of unique local cuisine, ice and snow leisure sports, cultural exhibitions and performances, and even some Chinese New Year folk customs.

During the «Great Wall Hero 2021» event, foreign experts involved in winter sports and tourism in Beijing discussed the prospects of Beijing’s cultural tourism in the «post-winter Olympic era».

The speakers shared their views on how to take advantage of the Beijing Winter Olympics and to look forward to the future development of Beijing’s winter cultural tourism industry. Justin Downes, winter sports and tourism commercial complex executive, expressed his opinion on the potential advantages for Beijing. He predicted that Beijing will become an even greater attraction for overseas tourists as the only double Olympic city host.

At the end of the discussion, all media and tourism personal were shown three individual video productions. Each one displayed three different tourist routes that people can enjoy during the Beijing Winter Olympics. The titles of the three routes included «Exploring the Double Olympic City of Beijing», «The Nature Tour at the Foot of the Great Wall» and «A Trip to the Snow Town of Zhangjiakou». The promotional videos gave the audience members a visual understanding of what to expect. Different regional characteristics, cultural and tourism resources of the various Olympic areas were all on show. Finally, some leisure and entertainment options, as well as the many places to eat, drink, and socialise made a feature at the end of the videos.

Later on in the afternoon, the guests visited the National Speed Skating Oval, also known as the «Ice Ribbon», which will be officially unveiled at the 2022 Winter Olympics. They had the pleasure of seeing for themselves the smart technology and environmental protection design used in the construction of the venue. They all expressed their excitement for the «Ice Ribbon» to finally be used on a world stage. It is Asia’s largest full-ice surface venue and uses the world’s most environmentally friendly ice-making technology: carbon dioxide transcritical direct cooling ice making system. It is a great example of Beijing’s efforts and achievements in the field of global sustainability development. The visit was livestreamed on the Visit Beijing Facebook fans page attracting more than 100,000 views.

The Bureau has operated the official «Visit Beijing» account on Facebook, Twitter, Instagram and YouTube since 2013, which has been a great success. Live broadcasts, short videos, public interviews, and other forms of media have been used to show the world what it’s really like on the ground in Beijing. It continues to proudly show the world China’s anti-epidemic achievements and the cultural charm of the capital.

«I welcome very much the idea of Aspire Fellows Meet Other Sports,» said Arsene Wenger at Aspire Academy Global Summit