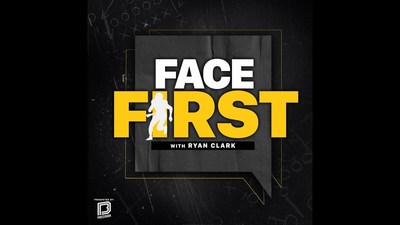 From Super Bowl Champion, NFL Analyst and MMA Commentator Ryan Clark, comes the latest episode of his popular podcast/ digital series, FaceFirst. The weekly series brings fans along for a conversation with Clark, as well as weekly guests. For this first Culture Wednesday podcast, Clark welcomes fellow ESPN NFL analysts Domonique Foxworth and Marcus Spears. The three breakdown sport media’s evolution & how «culture» has been the driving force. Clark commented «I have so much love & respect for Swag & Dom. It was an honor to sit down with my friends & share life.»

The FaceFirst series, is an independent production from Clark and is distributed on YouTube, Apple Podcasts and Podbay.

Each episode of FaceFirst zooms in on stories from Clark’s life as a husband, father, Founder of DB Precision, his playing days in the NFL and more. The first 30 episodes of FaceFirst, have featured guests such as NFL Hall of Famer Troy Polamalu, current NFL defensive backs Landon Collins, Deshazor Everett, Justin Reid, Jalen Thompson, and Deionte Thompson and a recent conversation with fellow Pittsburgh Steeler James Harrison.

Ryan Clark, who joined ESPN as an NFL analyst in February 2015 on the day he retired from professional football, is also a co-host of DC & RC, a program focusing on MMA topics. Premiering in the summer of 2021, Clark teamed with ESPN’s Daniel Cormier, a legend in the Octagon and now an MMA commentator. The weekly show is seen on the ESPN app, @ESPN on YouTube and Twitter, as an audio podcast, and on ESPN2. Clark brings to the show the die-hard passion of a super-fan and a genuine understanding of MMA. For NFL topics, the 13-year NFL safety and Super Bowl champion regularly appears on NFL Live, Get Up and SportsCenter. Also, Clark is the Founder of DB Precision – an academy dedicated to elite level training with professional athletes.