OAKLAND, Calif., Aug. 16, 2021 /PRNewswire/ — OLIPOP, the healthy soda brand known for its delicious taste and digestive health benefits, today announces its partnership with Gabby Thomas, professional runner, bronze medalist in the women’s 200 meter dash and silver medalist in the 4×100 meter relay at The 2020 Olympic Games in Tokyo, Japan. As an OLIPOP ambassador, Thomas will take part in branded appearances throughout the next year and be the subject of several marketing campaigns.

Gabby Thomas became a household name following a standout performance at the 2020 Olympic Trials in Eugene, Oregon when she ran the second fastest time ever recorded in the women’s 200 meter dash, just behind Florence Griffith-Joyner’s world record set in 1988. After making the U.S. Olympic team in that event as well as the 4×100 meter relay, Thomas maintained momentum in Tokyo where she placed third in the women’s 200 meter final with a time of 21.87, one of the fastest times in Olympic history. A graduate of Harvard University where she earned a Bachelor of Science Degree in neurobiology and global health, Thomas won 22 conference titles during her college career and set school and Ivy League records in the 60, 100, and 200 meter distances.

«Gabby is an exceptional human being with an amazing story who we are honored to be partnering with,» said Ben Goodwin, Co-Founder at OLIPOP. «Olympic athletes, especially those with medical expertise, are very mindful of what they consume, so when we found out that Gabby was an organic fan of OLIPOP we were thrilled. We are very proud of Gabby’s showing at the Olympics and excited to see where our partnership takes us.»

In a world where elite athletes can choose to work with just about any brand, Thomas’ partnership with OLIPOP is yet another sign of the evolving consumer landscape. An increasing number of consumers, Olympic athletes included, are beginning to demand products that provide clear, identifiable health benefits. With its low-calorie, low-sugar formula that is scientifically proven to bolster digestive health, OLIPOP has invented a new kind of soda that meets this new demand and leads the growing functional beverage category.

«As an athlete with a background in public health, I’m very careful about what I put into my body and have always been fascinated by the connection between what we consume and the way it makes us feel,» said Gabby Thomas, double Olympic medalist. «I love OLIPOP because it’s not only delicious, it’s one of the few products of its kind that truly walks the walk. A lot of brands market their products as healthy, but not many can point to science and say ‘This is why we’re good for you; here’s the proof.'»

OLIPOP’s deal with Thomas comes through partnership with World’s Greatest, an innovative media brand that produces short-form and long-form video content featuring its talented roster of Olympic and World Champion level athletes. In addition to Thomas, World’s Greatest partners with many of the top athletes on the planet including American pole vaulter Sam Kendricks (Olympic Medalist, World Champion), shot putter for the U.S. Ryan Crouser (2x Olympic Gold Medalist), one of the greatest sprinters of all time, Shelly-Ann Fraser-Pryce of Jamaica, Norwegian snowboarder Torgeir Bergrem, and many others.

About OLIPOP
OLIPOP is ‘a new kind of soda’ that offers the experience of enjoying cola without the guilt. OLIPOP was formulated alongside a team of leading scientists who developed a tonic that combines the classic soda taste with the benefits of plant-based fiber, prebiotics, and other botanical ingredients proven to balance out the body’s microbiome and promote overall well-being. OLIPOP is available in a variety of flavors including Vintage Cola, Orange Squeeze, Strawberry Vanilla, Cherry Vanilla, Lemon Ginger, Root Beer, Orange Cream and Classic Grape. OLIPOP is Non-GMO, paleo, vegan-friendly and gluten free and is available online at www.drinkolipop.com as well as more than 5,000 grocers nationwide including Whole Foods, Sprouts, Kroger, Safeway, and Wegmans. 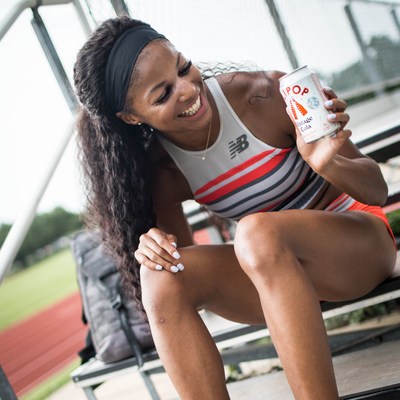