SÃO PAULO, Oct. 15, 2021 /PRNewswire/ — It was announced today by São Paulo Mayor Ricardo Nunes that the city will be welcoming a new 20,000 capacity arena, developed through the partnership of Live Nation Entertainment, the world’s leading live entertainment company; Oak View Group (OVG), the global venue development, advisory, and investment company for the sports and live entertainment industries; and GL events, a world-class provider of integrated solutions and services for events, who was awarded a 30-year lease by the City of São Paulo for the Anhembi campus (4 million square feet). The state-of-the-art ARENA SÃO PAULO will host live events including concerts, sports games, family entertainment, and more, and will be located within São Paulo’s premier entertainment destination, the ANHEMBI DISTRICT, which is already well-known for hosting the Carnival parade, among other events. 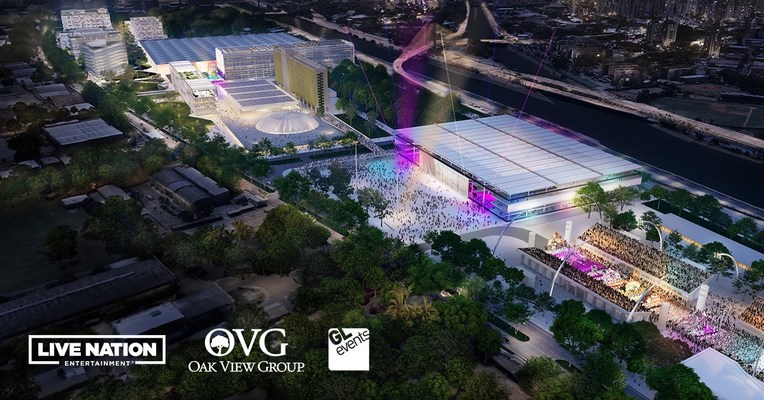 As part of the development agreement, Anhembi will emerge as São Paulo’s newest district, revitalizing the fabric of the surrounding community. The ARENA SÃO PAULO announcement marks the beginning of the re-development of the whole ANHEMBI DISTRICT, which will include a large program of real estate investments. Anhembi will be transformed into a global benchmark for events, featuring the indoor arena, a cultural boulevard, an exhibition center, and São Paulo’s first next-generation international convention center. The agreement marks the most significant step towards the modernization of the complex in its 50-year history. As a result of the redevelopment, the complex will generate cash flows of approximately 5 billion of Brazilian Reais of economic benefit for the city and local businesses and become one of the main engines to increase the São Paulo economy.

At the same time, this development creates a historic opportunity for São Paulo, the 4th largest city in the world and the wealthiest economy in Latin America, to continue maximizing its prominence as one of the world’s top destinations for concerts, sports, e-sports, family events, exhibitions, and conventions.

«Today is a historic day for our city because we are starting the implementation of the Arena São Paulo, a project leaded by the three best companies in the world in their industry. We are going to build the best arena in Latin America. It will be a major achievement for the city of São Paulo and for the world», said the mayor of São Paulo, Ricardo Nunes.

In addition to developing the venue, Live Nation and Oak View Group will be the operators of the facility and will oversee event bookings. Live Nation is focused on featuring both international and domestic artists at the city’s future premier large entertainment venue, ARENA SÃO PAULO. Live Nation has an important presence in Brazil hosting major festivals such as Lollapalooza and Rock in Rio, while also promoting local and international tours.

«As the leader in live, we’re excited to be expanding our footprint in Latin America by creating a world-class arena in São Paulo. This new venue will add to our portfolio of 200+ venues worldwide and we are proud to contribute to the growth of São Paulo as a live music hub and international touring destination,» said Michael Rapino, president and CEO, Live Nation Entertainment.

«GL events is a leading global player and Brazil’s largest operator in the events sector. We are excited to partner with OVG and Live Nation Entertainment, two global entertainment leaders to invest in ARENA SÃO PAULO. Entertainment is a major component of ANHEMBI DISTRICT. We look forward to capturing synergies between ARENA SÃO PAULO and our network of venues, including Rio de Janeiro’s Jeunesse Arena.» said Olivier Ginon, founder and chairman of GL events.

About GL events
With over 40 years of experience, GL events is a leading global player of the events industry, active on the main market segments:

GL events is organized in 3 divisions, and provides a comprehensive service offering:

GL events is involved at every stage of the event, from concept and design to implementation.

GL events has invested over 1.3 billion reais in Brazil since 2006.

In December 2020, GL events Brazil was awarded by the City of Sao Paulo the concession to operate the Anhembi District for the next 30 years.

GL events is listed on the Eurolist Euronext Compartment B (Paris Stock Exchange).

About Oak View Group (OVG)
Oak View Group (OVG) is a global sports and entertainment company founded by Tim Leiweke and Irving Azoff in 2015. OVG is focused on being a positive disruption to business as usual in the sports and live entertainment industry and currently has eight divisions across four global offices (Los Angeles, New York, London, and Philadelphia). OVG is leading the redevelopment and operations of Climate Pledge Arena at Seattle Center as well as leading arena development projects for UBS Arena in Belmont Park, NY; Moody Center in Austin, TX; New Arena in Coachella Valley, CA; and Co-op Live in Manchester, UK. OVG Global Partnerships, a division of OVG, is the sales and marketing arm responsible for selling across all OVG arena development projects. OVG Facilities, a division of OVG, is the facility management, booking, security, and sanitization services arm that performs services for both OVG’s arena development projects and clients on a 3rd party basis. OVG Media & Conferences, a division of OVG, publishes Pollstar and VenuesNow, in addition to hosting live entertainment-centric conferences around the world. OVG’s Arena Alliance, a division of OVG, is a collection of the top 32 venues in North America that provides a platform for booking, content, and sponsorship sales opportunities. Learn more at OakViewGroup.com, and follow OVG on Facebook, Instagram, Twitter, and LinkedIn.