NEW YORK, Sept. 20, 2021 /PRNewswire/ — Lithuania honored American Jewish Committee (AJC) CEO David Harris today with The Cross of the Knight of the Order for Merits to Lithuania, one of the Baltic nation’s highest awards. Lithuania President Gitanas Nausėda bestowed the award on Harris during a ceremony at the Consulate General of the Republic of Lithuania in New York. 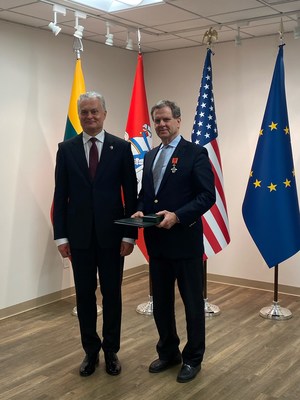 «David Harris is a staunch supporter of a transatlantic partnership, goes to great lengths to remind the world of the dangers of rehabilitating totalitarian regimes, and is also an active campaigner for human rights and democratic freedoms,» said Nausėda.

«Under David Harris’s leadership, American Jewish Committee (AJC) actively supported democratic changes in Eastern and Central European countries,» the President continued. «AJC was the first American Jewish organization to advocate for the recognition of Lithuania’s independence on August 27,1991, and addressed then-President George H.W. Bush in a letter calling for the recognition of the independence of the Baltic States as soon as possible.»

AJC Central Europe, another Harris initiative, opened in Warsaw in 2017 and enables the global advocacy organization «to maintain an Eastern European presence to cultivate better relations with the governments of the Baltic and Visegrad countries, as well as their Jewish communities,» he said.

AJC energetically supported the successful expansion of NATO membership to include the Baltic states and welcomed the entry of the three countries into the EU in 2004.

Harris, a frequent visitor to Lithuania over the past 30 years, thanked President Nausėda for the award, which is given to foreign nationals and Lithuanians «for special merits to Lithuania, fostering and development of interstate relations» and other fields.

«Lithuania is a special country in many ways, and its link with the Jewish people is longstanding, complex, and deeply rooted,» said Harris. «Moreover, given my lifelong opposition to communism, including the Soviet occupation of the three Baltic states, it was essential for me to seize a once-in-a-lifetime moment and stand up for the integration of Lithuania, as well Estonia and Latvia, into the Euro-Atlantic architecture.»

Described by the late Israeli President Shimon Peres as the «foreign minister of the Jewish people,» Harris has been decorated by foreign governments more than any other Jewish organizational leader in American history. In addition to Lithuania, he has also been honored, in some cases multiple times, by the governments of Azerbaijan, Belgium, Bulgaria, Cyprus, France, Germany, Greece, Italy, Japan, Latvia, Moldova, Poland, Spain, and Ukraine for his international efforts in defense of human rights, advancement of the transatlantic partnership, and dedication to the Jewish people.

Taoyuan Forest International Tourism Resort of China: An Open Invitation to All