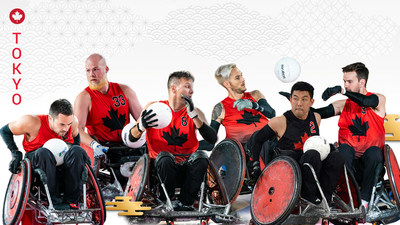 Led by co-captains Patrice Dagenais and Trevor Hirschfield, the squad boasts an experienced roster with nine players returning from previous Games, including:

Three players will be making their Paralympic debut:

«We’ve had more time than usual to prepare for these Games, in less-than-ideal circumstances, but I believe we’ve used our time wisely,» said co-captain Hirschfield. «We are bringing three first-time Paralympians to Tokyo and seeing their dedication and enthusiasm has been a huge source of motivation for our team. We have so much drive, talent, and experience in our program. I am honoured to be one of the captains to battle with this team in Tokyo.»

Canada qualified for the Tokyo Paralympic Games in March 2020, just before the pandemic shut down sport competitions worldwide. The final wheelchair rugby qualifying tournament, hosted in Richmond, BC, filled the last two spots for Tokyo. The same roster that suited up for Canada at the qualifier, which saw the country punch its ticket with a semifinal victory, has been named to the Tokyo team. The Paralympic Games will be the team’s first international competition since then.

«We are very excited to represent our country at the Tokyo Games next month,» said co-captain Dagenais. «It has been a long wait, but we used that extra time to better prepare ourselves for what is expected to be a fierce competition and we truly believe that all our hard work will pay off.»

Currently ranked No. 5 in the world, Canada is coming off a silver medal performance at the Lima 2019 Parapan Am Games. The nation also finished sixth at the 2018 world championships and fourth at the Rio 2016 Paralympic Games.

«I’m super excited to go to my first Paralympics,» said Létourneau. «I hope the fire burning inside me is contagious and gets my teammates fired up! The team’s journey to Tokyo was a rollercoaster for sure. Everyone came together at our lowest and now it is going back up. It was a hell of a ride, but we made it a fun ride. With the pandemic, we went through a lot of new protocols and rules. Our team staff were on top of everything to guide us smoothly and navigate easily through it all. We’re coming out of this with sore noses, but full hearts.»

Canada will open its Tokyo campaign on August 25 versus Great Britain. Sitting in Group B for round-robin play, the Canadians will also take on USA (August 26) and New Zealand (August 27). The semifinals and classification matches will be contested on August 28 before the wheelchair rugby competition wraps up on August 29 with the medal matches. The full schedule can be found here.

«We’re very pleased with the strong group of athletes selected and how we have prepared in some tough circumstances over the last few months,» said head coach Patrick Côté. «I could not be prouder of the team, and I am very confident all the hard work everyone has put in will show up in competition. Every game will be a battle, and we are ready for it.»

The sport of wheelchair rugby (originally called ‘murderball’) was invented in Canada in 1976, and was introduced as a demonstration sport at the Atlanta 1996 Paralympic Games, where Canada won a silver medal. It has been an official sport on the Paralympic program ever since, with Canada capturing two silver medals (Athens 2004 and London 2012) and one bronze (Beijing 2008) to go alongside two fourth-place finishes (Sydney 2000 and Rio 2016).

«Congratulations to all 12 members of the Canadian wheelchair rugby team going to Tokyo!» said Stephanie Dixon, chef de mission, Tokyo 2020 Canadian Paralympic Team. «I know hard this team has worked over the past several months to be heading into the Games in top shape and ready to compete together. The wheelchair rugby tournament is always exciting, and that will no doubt be the case again this year. I wish Team Canada all the best, and look forward to cheering you on!»

The postponed Tokyo 2020 Paralympic Games will take place August 24 to September 5, 2021, in Japan. Canada is expecting to send a team of approximately 130 athletes, and audiences across the country will be able to follow all the action live through coverage from the Canadian Paralympic Media Consortium, including broadcast partners CBC/Radio-Canada, AMI, and Sportsnet, and digital partners Twitter, Facebook, and MXZN.

About the Canadian Paralympic Committee: Paralympic.ca