WASHINGTON, Aug. 6, 2021 /PRNewswire/ — America250, the nationwide commemoration of America’s 250th anniversary in 2026 led by the U.S. Semiquincentennial Commission, has partnered with the National Football League (NFL) for the America250 Awards – a multiyear awards program that celebrates Americans who exemplify the intangible qualities of the American spirit. The partnership was announced during halftime of the annual Pro Football Hall of Fame Game on FOX, and the nominations page for the award went live. 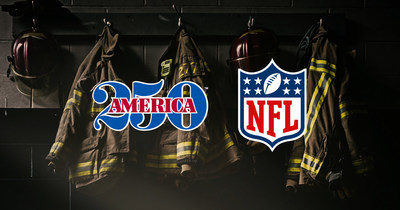 Created to honor those who display the everyday courage of the nation’s extraordinary citizenry, the America250 Awards seek to spotlight those who exhibit heroism, unity, justice, tranquility, valor, and equality, and advance and uphold the freedoms first forged in the founding promise of America.

«At the heart of our commemoration for America’s 250th anniversary are the people comprising the enduring and indomitable spirit synonymous with the American way of life. There is no better way to reach the public and tap into its reverence and respect for the extraordinary heroes who walk amongst us than with our partners at the NFL,» said Daniel M. DiLella, chairman of the U.S. Semiquincentennial Commission.

«The NFL is proud to partner with America250 to help shed light on those who have selflessly given back to their communities and beyond,» said Brendon Plack, senior vice president, public policy and government affairs, NFL. «As we celebrate our country’s 250th anniversary, we hope the stories of these award winners will inspire others to create positive change for centuries to come.»

Award eligibility and prize
Coinciding with the 20th Anniversary of September 11th, the public is invited to nominate an individual aged 18 or older whom they know personally and whose heroic actions were inspired by that historic day. Americans from all 56 states and territories are eligible to be nominated now through October 10. A distinguished judging panel assembled by America250 will select three winners to receive two roundtrip tickets and accommodations to a Thanksgiving Day NFL game this year where they will be announced in-person on the field.

The inaugural America250 Awards will recognize three categories of heroes:  9/11 Heroes, First Responders, and Community Champions. Criteria for each category include:

About America250
America250 is a multiyear effort to commemorate the semiquincentennial, or 250th anniversary, of the United States. The purpose of the U.S. Semiquincentennial Commission, created by Congress, and the corresponding America250 Foundation, is to catalyze a more perfect union by designing and leading the most comprehensive and inclusive celebration in our country’s history. America250 represents a coalition of public and private partners all working to create initiatives and programs that honor our first 250 years and inspire Americans to imagine our next 250. The commemoration period began in 2020, culminates on July 4, 2026, and officially concludes in 2027. For more information, visit www.america250.org and follow us on Facebook, Twitter , Instagram and TikTok.